When I started this project, I envisioned the WebCell as the user interface, via web pages, for otherwise self-contained home automation devices. For example, the WebCell might pass on to a thermostat a list of temperatures and times that the user had entered, and the thermostat would handle it, even if the WebCell was subsequently disconnected. In practice, however, the devices I’ve encountered need more supervision – they need a controller to maintain the schedule.

In January 2011, I started the design of the CellScript scheduler. I wanted total flexibility, and used the calendar feature of Microsoft Outlook as a guide for creating recurring schedules. The plan made its way into the CellScript Language Reference, and from there the coding began. By the end of February, the scheduler successfully “fired an event” on time – simulated, of course.

In March I felt the scheduler was in pretty good shape. It was time to write the web pages that would collect the settings and feed them into the scheduler. To help with this I took a class at the nearby community college in cascading style sheets (CSS), which is all about making web pages look the way you want them to.

Still I found writing the web pages to be a major challenge. The pages all use AJAX techniques and YUI 3 to make them as easy to use as possible. I was creating these pages to work with an Insteon irrigation controller and a pair of Insteon thermostats (for two separate furnaces in my house). For each system I had a setup page (irrigation zones, for example), and then a settings page (such as watering time for each zone and watering schedule).

My priority was the irrigation system, because I’d already wired in the Insteon controller. Fortunately we had a very cool and wet spring in Western Washington, giving me more time to get the irrigation pages ready. In late May the WebCell succeeded in starting an irrigation cycle on schedule, which turned out to be about two weeks to spare.

The push to get irrigation running on the WebCell gave me my first real experience with CellScript (as opposed to writing test cases). I did some tweaking and bug fixing before returning to the next set of web pages, for the thermostats. On August 13, 2011, the WebCell took control of the thermostat schedule. Program size is now at 83,464 bytes. And I will be taking a break from WebCell development for a while!

Posted by Tim Paterson at 6:48 PM No comments:

With the production prototype in hand and working, and plenty of program space available in the XMEGA, 2010 was spent methodically working through “the list” – the CellScript Language Reference. Hardware features came first, such as ADC, DAC, PWM, and input capture (measuring the pulse width or frequency of an incoming signal). This would allow testing circuitry on the DevKit whose job was to demonstrate these features.

But the list was very long, and sometimes got longer instead of shorter. Work items included getting multiple scripts to run at once, implement the DHCP network protocol, storing important data in the internal non-volatile memory (EEPROM), adding “MIME types” to web pages – and fixing lots and lots of bugs.

The WebCell has several ways to communicate with the outside world besides Ethernet, including three serial ports, an SPI (Serial Peripheral Interface) port, and an I2C (Inter-Integrated Circuit) port. “The list” has just a few functions and properties that CellScript needs to utilize these ports – things like read(), write(), and bitRate. Implementing these for the WebCell was a clearly understood task. However, what would these do on the simulator? This question applied to all the hardware features. I spent much of August creating ways for the user to interact with simulated hardware features, allowing entry of the stuff going in, and display of the stuff coming out.

In September I started creating web pages designed to demonstrate and test hardware features. In the process I looked into YUI, the Yahoo! User Interface. The first page I made was for testing PWM (pulse-width modulation), and it used a YUI “slider” to adjust the PWM width. YUI also made it easy to have the web page contact the server in the background (in this case, the WebCell or simulator) for instant updates – a common way to make web pages more interactive called AJAX (asynchronous JavaScript and XML).

The demo web pages were helpful in completing testing of the production prototype. Satisfied that I’d found all the wiring errors, I began revision of the PCB. On September 16, 2010 I sent in the order for new PCBs, and received them October 4. When assembled and put to the test, no problems were found in the hardware design. I now had two complete working units: the production prototype, with its cuts and jumpers; and the final production model.

Using the new hardware, I set out to give the WebCell the ability to have its firmware updated over the network. Part of that process included transmitting a somewhat large firmware file from the PC to the WebCell via FTP, which turned out to expose numerous problems in previously untested FAT file code. I had had a similar experience back in July, which had got me thinking about how to test the FAT file code better.

The CellScript simulator was a great way to test and debug CellScript itself, because the same source code was used for both the simulator and the real WebCell. However, the simulator just used Windows for file operations, so it didn’t help test the FAT file system. But I realized I could change that, using raw sector read/write calls through Windows. In just a few days I was able to create a special version of the simulator, just for testing, that used my FAT file code to read & write files on an SD card on the PC.

I did a lot of testing and fixed a lot of bugs in the FAT file system, now using nothing but the simulator. In December I ended up doing a major overhaul of the whole system. And now I had a large set of tests I could run anytime to make sure the FAT file system was working right. Program size when I was finished was 70K, out of the 128K available.

Posted by Tim Paterson at 6:41 PM No comments:

In early 2008 Atmel announced a whole new line of microcontrollers called XMEGA that sounded pretty interesting. Compared to the existing ATmega line, they offer much higher performance and much more capability, all at around the same price or less.

As a new product, availability is an issue. I originally placed an order when they first showed up in my distributor’s catalog in September 2008, and just let it ride on backorder. The order was eventually cancelled because that specific part (ATxmega64A4) was never produced. A year later I did get my hands on one of the top-of-the-line XMEGA chips, the ATxmega256A3. This was not the chip I would use for my final hardware design, but it did give me a chance to test it out.

The XMEGA family is only available in surface mount (SMD) packages, so I mounted mine onto a DIP adapter. Then I put it on my solderless breadboard in place of the ATmega324P, wired up to an SD memory card socket and serial port. By the end of September 2009 I had my “mini-DOS” FAT/SD test program working on it. 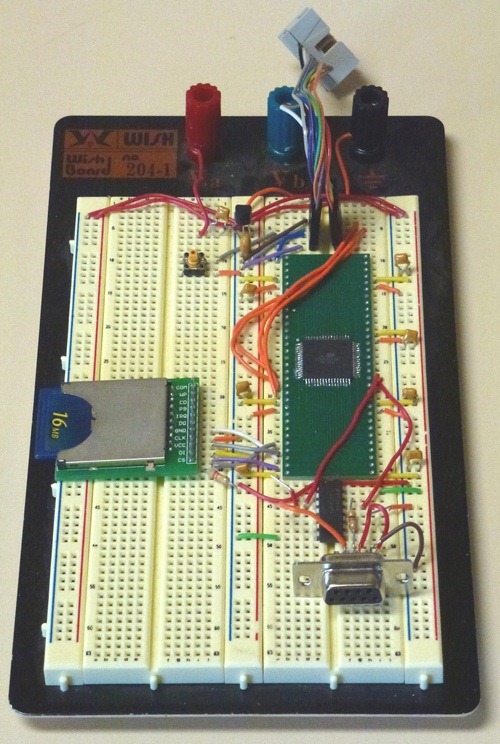 Also in September I started work on the hardware design for the “production” WebCell, using the ATxmega128A3. I had never used either of the radio circuits on the engineering prototype, so I decided to leave them out. In the home automation application I envisioned, the WebCell would have to connect to some other device. I had experimented with Insteon products so I knew the WebCell could be hooked up to control their devices, for example.

In November I finished the layout of the WebCell PCB. Next I started design of the “Development Kit”. This is another PCB that the WebCell can plug into that makes it easy to try out. For example, it powers the WebCell from USB, provides a serial connector, and includes a reset button.

I also designed a variation of the WebCell that I call the FileCell. This variation removes the network interface and replaces it with a USB port and battery backup. So instead of being a web server, it is more of a general-purpose controller module. It could be particularly useful for data logging because of the high storage capacity available on the microSD card. I wasn’t sure if I would ever build this variation, but I wanted to explore how it would be different from the WebCell so I could make sure the Development Kit would work with both. Because of the battery backup, I did end up changing some of the interface connector pins on the WebCell.

I had to order samples of various parts to decide which ones I wanted to use and how they would fit. I finally placed orders for production prototype PCBs on January 21, 2010. I had been planning to get PCBs for all three designs, but in the end I saw no reason to build the FileCell variation yet.

The PCBs arrived on February 8. I took them and a kit of parts to my local electronics assembly company, Printed Circuits Assembly. Both boards use chips in leadless (QFN) packages, which are really hard to solder by hand. I got the assembled units back about a week later. 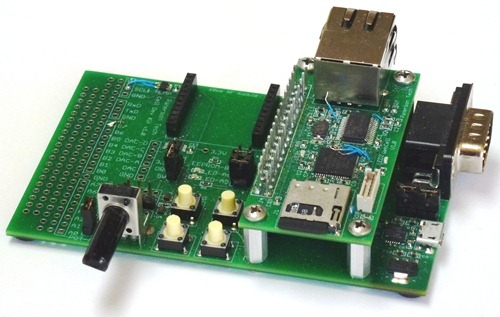 It took a few weeks to get the software ready for the production prototype and to get the prototype working. The final hitch was an error in the wiring of the Ethernet jack, requiring cuts and jumpers of the PCB traces. Once that was fixed, on February 28, 2010, the prototype began serving up web pages.

During the wait for assembly, my work on the WebCell software started bumping up against the 64K program limit of the engineering prototype. The production prototype with its 128K program size came just in time to keep me working.

Posted by Tim Paterson at 3:17 PM No comments: